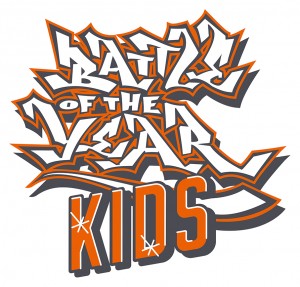 Why a BOTY KIDS competition?

One of the ideas behind it, is that we would like to educate and sensitise the young generation with the importance of a crew and as a collective in the breaking scene.
Also, for you as an organizer it could be a good way to activate more crews and attract more audience for your event.

What are the rules?

The rules are exactly the same as for the “normal” BOTY elimination.

Only difference for sure is the age. The participants can ́t be older then 15 years, that means they can ́t be born before 2001.

Integration in your event:

There are two possibilities to integrate BOTY KIDS in your event.

If a group of children would be in top 4, they would participate in both categories the regular BOTY and the Kids BOTY as well individually.

The two crews of children with the highest score will make their own final, (same system as the BOTY)

In case that a Kids Crew would win both BOTY formats, the group that came second in the ” BOTY Kids” would represent their country at the BOTY World finals .

Make two separate competitions during the event and chose for children who wish to participate in both competitions.

“BOTY International” will provide accommodation and meals during the weekend in Germany for 9 people including coach maximum.

« BOTY – Kids » will take place October 29th 2016, in the afternoon.
The winners will have the great opportunity to perform their show at the BOTY main stage, Saturday night in front of the whole audience.
We are planing to let a maximum number of 6 crews enter the first BOTY Kids competition.

You need to check with potential crews, if it would be possible for them if they skip a few days of school, since we need the crews latest in Essen, Germany Friday at 13:00 o clock in the venue.

Please provide correct information in order to sign up on this site.